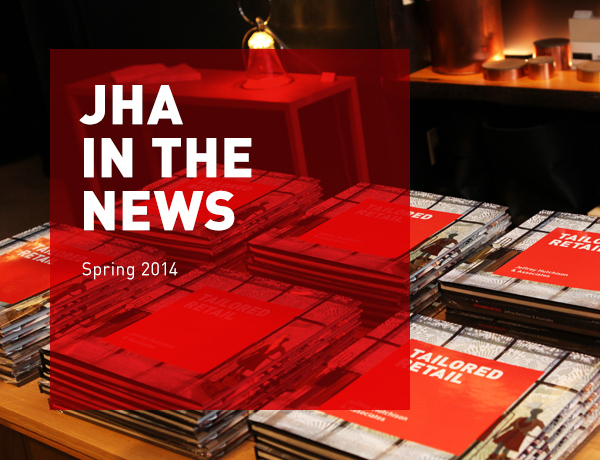 With the launch of the image-driven monograph, Tailored Retail — a book covering 13 years of Jeffrey Hutchison & Associates work — the award-winning architecture firm has piqued the interest of numerous prestigious publications this spring.

Editor at Large
Tailored Retail made the roundup of nine new design books compiled by the “CNN of the Design World.” With a dedicated readership of designers, manufacturers, editors, publicists, and trend-setters, Editor at Large writes that the debut tome celebrates Hutchison’s design concepts for “the most iconic names in the fashion industry,” such as Barneys New York, Saks Fifth Avenue, Narciso Rodriguez, and Ralph Lauren. Hutchison’s name appeared next to new titles from industry icons such as Kelly Hoppen, and Adam Tihany.

WWD
The voice of authority for the fashion, beauty, and retail industries, international “fashion bible” Women’s Wear Daily covered the launch of Jeffrey Hutchison & Associate’s Tailored Retail at Atelier Courbet in New York City on January 29, 2014. WWD reports that ten percent of sales of the book will benefit Architecture for Humanity, which teams architects and designers with communities in need.

CREEM magazine
Boasting an audience of visionaries and trailblazers, CREEM magazine features a visually stimulating and informative approach to tell stories about art, fashion, and music. The quarterly publication picked Hutchison’s brain to unveil his inspirations, most beloved projects, and the future of Jeffrey Hutchison & Associates.

d+a (design and architecture)
The Singapore-based magazine talked with Hutchison about the evolution of his career, design elements that keep customers in the store (and coming back for more), and how to create the recipe for successful retail.